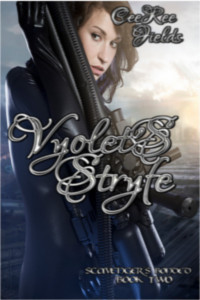 She’s a thief bent on vengeance. He’s a fighter determined to steal his thief’s heart.

Vyolet is a thief and mistress of many disguises. Every city knows her by a different name. It comes in handy when she’s running from her psychotic cousin. A cousin she has always stayed one step ahead until her boss forces Vyolet to turn the tables and hunt her archnemesis. Captured and left to die in a Scavenger Installation, she’s hellbent on escaping before her cousin returns to kill her.

Stryfe is a fighter born and raised in the deepest pits the Scavenger Installations had to offer until he escaped. Years later, he now helps rescue others from his fate within the Installations. However, this last mission goes horribly wrong when the installation he infiltrates explodes.

Crammed into a box with a thief as they both await death, Stryfe is intrigued by her fearlessness. Hearing that the thief expects to die on her own mission, he refuses to let that happen. However, in helping her, he didn’t expect his heart to be stolen during the mission.

Joining forces, Vyolet and Stryfe bring both beauty and brawn to bear on the most dangerous enemy either has faced. Will they be enough to take her nemesis down? Or will she be forced to sacrifice the man she loves to save the cities of the MFZ?

Vyolet must have pissed all the fates on earth off to be stuck in this sweltering coffin. She’d already ‘escaped’ once, but was forced to turn back with all the gunfire and fighting taking place. It was then she heard a baby’s piercing cries coming from outside the steel box she’d hidden in. Just as she had gotten the door unlocked it was jerked open. Red, feral eyes met Vyolet’s. Terror shivered up her spine, but was quickly replaced with anger when the more than six foot large body crammed itself into the small space. Then the idiot slammed the door behind him.

She shoved an elbow into his stomach in agitation, but got no reaction. Frustrated, she cursed her boss for sending her on a damned chase, for the package she’d had to stash, the man who had captured her on her cousin’s say so, her vacking cousin who’d sent her down here, and finally the creator for having absolutely no scaving luck. Rubbing her finger and thumb together on her left hand she charged her cybergen arm. She wasn’t sure if she would need it, but she never took chances with people in her personal space. And if this giant tried something… Yeah, more like when he tried something, she would be ready.

As she was steeling her resolve he seemed to wrap around her. What.The.Hell? Before she could do anything to the man, a reverberating BOOM rent the night. Then a resonating blast shook the ground. The box they were in was tossed end over end. Expecting to be slammed from one side to the other, she braced herself, shocked when muscled arms tugged her closer. Cradling her gently, his body absorbed the impact as they were shaken like a martini. He was the only thing that stood between her and certain pain.

That small kindness in the midst of this hell allowed her a kernel of trust. And with that small spark that flared to life inside her, she made a decision and released the charge in her hand. Wrapping her arms around him, she held on. Heat and a strange comfort enveloped her as if here she would find safety. Rolling her eyes at that, she called it for what it was, there was no safety in this world anymore, especially for her. But she could pretend for a moment this man wanted to keep her safe. She could pretend a lot of things as long as she remembered her reality.

Hopelessness dragged her into its depths as she remembered the baby was still out there. Too late. When children depended on her, she was always too vacking late.

Recently it seemed her timing sucked mutant balls, which for a thief that could, and eventually would, prove fatal. It was as if the fates toyed with her for their own amusement. She’d never had this much bad luck in a long time. Hell, the last time lady luck had decided to take a piss on her she’d lost her baby cousin to Norwyna’s betrayal and half of Vyolet’s arm had been sacrificed. At that memory she shook herself and pulled her mind back to her current situation.

There was no way the little one had survived the blast. Vyolet allowed the sorrow to flow through her and a few tears slipped down her cheeks. Then she pulled herself together. She needed to rally her defenses and focus on escaping… again.

The installation she’d been carted off to a week ago, had of course come under attack just as Vyolet had decided to leave. As she’d tried to escape she’d snatched a medkit on the way out. Then she’d had to turn tail and run back to the metal box that she was now trapped in. She shifted, but it didn’t take the pressure off of her back where the medkit dug into it. Sighing she leaned her head against the metal wall at her side as she cleared her mind.

She’d always been able to adapt to changes on the job, but with this job there had been constant change and no time to adapt. Adapt hell, she could barely keep up with all the shifts that kept occurring lately. First being given a mission that she knew she would fail at, second being kidnapped and last, but certainly not the least of her bad luck, traded to this Scavenger Installation. An Installation at the butt end of nowhere. Of course if that wasn’t crappy enough, then came the attack, and finally a bomb.

She wanted to ask what else would go wrong, but if she did it would be like waving a huge red flag out to the universe asking for more of the fates attention. And apparently she was not on their friend’s list at the moment. She kind of wished she was on the ignore list, instead of the shit list she was currently on.

In the week she’d been here she hadn’t even had a chance to map the installation before the attack which made her feel all kinds of stupid. The baby’s whimpering pulled her from her negative and unproductive thoughts. Hearing the sound her body went on automatic pilot and tried to push past the man that was blocking the door. She wanted to hit him until he moved, but she stopped herself. It wasn’t his fault she was here and he had protected her from injury when the building blew up. Unfortunately for him, it was his fault that he was blocking her only exit. But maybe she could get him to move without resorting to violence. Besides, she didn’t need to damage her hands, they might be needed later.

A master escape artist, she always took care of her hands first. Especially when in a hellhole like this one. Then her twisted sense of humor kicked in and had her grinning. A thief and instead of escaping or stealing anything she had run towards a box and locked herself in. And not to test her lock picking skills, nope she’d run there to hide like a scared rabbit.

The fighting hadn’t scared her as she could hold her own in most combat situations. However seeing the brutal combat with Scavenger on Scavenger, had made her hesitate.

It was odd since most installations worked together. The strangeness of it slowed her down, but didn’t stop her from seeking an avenue of escape. No, what had given her the big red light and sent her scurrying for cover was the shooting. Only the Frontliners military and the Bandits had guns. Neither were factions Vyolet wanted any part of. Thumping her head against the metal wall again in frustration, she blew a strand of hair from her eyes.

She had good instincts in strategy. It was needed to not only puzzle out how to get in and out of situations, but also how to open impossible doors. Her strategy at the moment was to survive. In order to do that she decided to play it smart and go back to the steel prison until the fighting was over. Which was how she had come to be back in the metal box.

The baby’s whimpers became quiet cries. Happiness coursed through her at that sound. So few things withstood this harsh environment, so for the baby to have made it gave her hope. It was then she heard the cry for help mixed with the baby’s wails.

She shook the man blocking her exit.

“Can you open the door?” she asked her voice thick from holding in her screams.

He moved sluggishly as he took care not to squish her, but he wasn’t able to get the leverage to open the door. Then he slumped. “I cannot.”

His body suddenly went lax and his massive weight bore down on her. “Hey, are you okay?” No response. Mother mutant, he’d fainted. As she was trying to think of what to do, she felt something dripping on her arm. He’d been hurt. It figured.

She didn’t know the man. Was he one of the many tormentors? Or someone who was freeing the prisoners? She was leaning towards tormentor since he’d left the baby outside. Regardless she knew if he died the Scavengers would blame her and pissed off Scavengers were not a fun time. Her head ached at all the stumbling blocks that kept falling in her way. She shook him again, still nothing. Tentatively she ran her hands over him.

Dammit, she needed to see him. Just from the brief examination she was positive his hand was gone. And it felt fresh as if it had been taken recently. She shoved the medkit into a corner and then wiggled around him. Resolve hardened within her as she twisted and slithered around the large man. When they were back to back, she braced herself against his muscled frame. She placed her feet to the bent door and forced it open.

It took all the strength in her legs to get the warped door to budge. Finally, a loud screech rent the night as the metal door creaked open, she cringed at the sound. Smoke filled the air as it swirled into the stuffy interior, replacing the overlying sweat scent that seemed to permeate the box from so much use.

As her vision adjusted to the moon drenched darkness, her eyes widened. Surprise had her pausing, the raid had decimated the building. She looked carefully around, but no one emerged into the light. Before she clambered from their metal tomb, she placed her feet on the sides. When she was as stable as she could be she grabbed the man under the arms and straightened her legs. He was larger than she expected, his heavy weight difficult to maneuver and had her grunting from the strain. Then his unconscious form was propped on the lip of the box. She scrambled down and guided him until he sprawled on the ground next to the tilted steel prison.