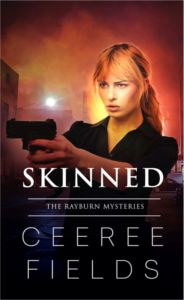 Hunting a killer is easy. Learning to love is hard.

Josephine ‘Jo’ Rayburn’s life was finally falling into place. She has a man she loves one who accepts her prickly personality, snarky attitude, addiction to knitting along with all her other quirks. Everything was going so well she is ready to take the next step in their life together.

Then bodies start dropping, and her past catches up with her.

Rhysian ‘Rhys’ Harrison loves Josephine. Her porcupine-like defenses shield a warm a gooey center that only he’s allowed to see. That she accepts and cares for his mentally challenged brother as well is the icing on the chocolate cake. He’s ready to ask her to marry him.

But when his ex-fiancée crashes back into his life, the picture-perfect future he sees with Josephine begins to unravel.

Amidst bitter betrayal, misunderstandings, crazy family, and dodging hitmen can Josephine and Rhysian find a way to forge their path to the future they crave? Or will this case be the one that tears them apart for good?

Jo slowed down as she approached the bullpen of the homicide department.

“Hell-o, handsome,” she drawled, looking at the tan khakis draped across a luscious ass.

Rhys Harrison twisted his head around to meet her gaze, then straightened from his bent position over her desk, a pen and paper clasped in each hand. “Hey, hon.”

Golden. From his tawny hair brushing his shoulders to his amber-colored eyes and sun-kissed skin, the man was perfection. At least to Jo.

“What’re you looking at, Abe?” Rhys’s eyes narrowed as they homed in on someone behind Jo. Then he returned the pen and blank piece of paper to Jo’s desk.

“Trying to see why Jojo keeps calling you handsome, man.” Abe strode to his desk with a smug smirk on his face. “I can’t see it.”

“Fuck you. My man is gorgeous.” Jo wrapped her arms around Rhys and lifted her face for a kiss.

Rhys dipped her back and claimed her mouth in an over the top display. Jo loved them as it marked her as belonging to Rhys. Hell, who was she kidding. She loved it because it clearly marked him as hers. Home. He tasted of everything good and right to her. Chocolate and a darker underlying essence that was pure Rhys. When he finally let her up for air, she smiled broadly and rubbed his chest through his burgundy polo shirt. “Love the way you taste.”

He hummed in agreement.

A paperclip sailed through the air and smacked her ear.

“Thought we weren’t going to lunch today,” she stated, pressing her nose into the hollow of his throat. This was her place.

Rhys didn’t tower over her like Abe and Sullivan and half the police force, most made her feel as if she were a Lilliputian.

“We’re not. Your mom was running errands on my side of town and dropped a package off at the Coroner’s office. Since I needed to drop off several autopsy files, I figured I’d bring it with me.” He ran his hands over her back and dropped his chin on the top of her head. He sighed. “We had two more OD’s yesterday. Jim did the autopsy and said they tied into your drug case.”

“Shit.” With a groan, she pulled away from him and dropped her backpack into her chair. “Why weren’t we notified?”

Rhys rubbed the back of his neck. “We assisted County on it, but it was one of the newer assistant MEs who were called, so none of us knew until after the fact. Jim did the autopsy as soon as the body hit the morgue and had me bring the results to you.”

Jo tapped a finger on the file. “Did he find anything?”

“Nope, same as the last ones. He’s sent off for tox reports and is waiting for you to tell him what other tests you want run.”

She smiled at him, happy to have a chance to see him in the middle of her day, even if the new autopsies were more bad news for her — seventeen bodies now. The smile slid from her face. “Thanks for bringing them. Oh, and Abe was an asshole, so he’s buying MacIntosh and me a beer and wings tonight.”

“When’s him being an asshole now different from any other day?” Rhys teased, reading her mood exactly and trying to lighten it. As if telling her it’d be okay, he had faith she would find the scum killing people. Since her faith ran out when they’d not found anything after the fifth body, she’d soak up Rhys’s for a while.

The mirth in his eyes turned them to a sparkling gold.

“Hey,” Abe sputtered, looking up from sorting files on his desk.

“Too true, but I’m taking him up on the offer today,” Jo retorted.

A press of lips to her forehead and Rhys released her. “Duly noted. I’ll take Rian to Andre’s. We can eat tacos, and he can chatter about the Formula One races with Alessandro.”

“Duly noted,” Jo teased back, snatching another kiss. She stepped to her chair and flopped into it. “I’ll see ya later.”

“Yes, you will.” Rhys smiled as he started walking to the exit, abruptly spinning around, he pointed to her. “And no more locking suspects into rusted out trunks. You have perfectly good cells downstairs,” he stated loudly before turning and dashing through the door.

Shock made her hesitate those precious seconds it would have taken to catch up to him. “Dammit, Abe!”

His snorting laughter bounced around the open office. “Totally worth that text.”