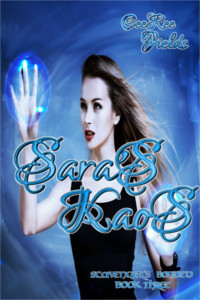 Their torture could not break her, but his kiss shattered her.

Sara Dover never met a stranger who didn’t become a friend, until Kaos. With him, she never gets it right, no matter how hard she tries. In him, she sees her perfect partner. If she could breakdown his rigid control; Sara knows an untapped passion lurks beneath it. Just as she knows she’s the perfect woman to show him how to tap into it.

MeleViolent L’Kaos likes everything, and everyone, to fall in line with his orders. Designed in the Northern Scavenger Installation to bring chaos to the human race, Kaos himself hates disorder. Until he crosses paths with Sara, an impish villager who loves pranks and thrives on bringing mayhem. If he could force her to lose her spontaneity, she would be the perfect partner for him.

At least, that was Kaos’s thought until the Western Scavenger installation kidnaps Sara. The longer she’s gone, the more he sees what he’s lost. Will they be in time to save her? And will she give him another chance to prove he’s willing to dance with her on the edge of chaos?

He came to her through the darkness. His large form filled the entry to her garden. Sara couldn’t tear her gaze from him as she sat in the wooden lounge chair behind the cottage.

Nightmares had woken her yet again, and she would be vacked if she could remember them. Only pain and heartache stayed with her when she woke. It pissed her off. To top that off for some reason she had a lot of issues going anywhere within the village.

Pushing the sleeve of her shirt up, she traced the lines along her arms. Some were somewhat straight and others crooked, but whether they matched or not didn’t worry her. No, what she found alarming was how the hell did they get there, and why couldn’t she remember?

A cough beyond the hedges reminded her of her visitor.

That was another thing, her mind wandered more now as if it were a tongue poking at a missing tooth.

Shoving the sleeves back down, she wrapped the blanket tighter around her. Kaos took her by surprise when instead of walking past her gate, he stepped through and took the other wooden chair next to her. It felt as if she’d seen him in that chair many times before, when in fact as far as she could remember she’d not ever had a visit from him. Tension rolled into her muscles, and her right hand crept to her left arm to count the scars.

Why was he here? Did I do something wrong?

She couldn’t remember leaving the cottage for a while, but maybe she’d walked in her sleep. Lolling her head to the side, she barely managed to pick apart his expression in the moonlight. “What’s up, K?”

Surprise rolled across his face, then his full attention was on her. She felt scorched under the heated stare.

If it had been anyone else, she’d swear the person was looking at her with want, but that didn’t make sense. Why was he suddenly attracted to her? A pulse of soothing calm wrapped her up and lulled her into relaxing. Like the lake lapping against the side of a boat, the last of her anxiety left her.

What is wrong with me?

His voice broke into her fractured thoughts. “Has Moira and Zroya been by?”

“Umm… I’m not sure where she went, but she said something about needing to check-in with her people and that she’d return in a few weeks.”

Sara didn’t know the woman, so why Onyx felt the need to explain where she was going, Sara hadn’t a clue. But with Kaos, Nakt, and Tyr off setting up a stronger perimeter, she had become some kind of go-to person. The puzzle snapped into place. “Oh, that’s why you’re here. To quiz me about what’s been going on while you were gone.”

Finally, understanding why Kaos sought her out, she settled into the warmth of her blanket and waited. “I should tell you before the interrogation starts, that Sir handled most of it, I think. Because it’s only been Elle, Onyx, and Zroya who have come to check-in with me. Oh, and Dahlia.”

“Interrogation? Why would this be that?” His deep voice warmed her, offered her a form of safety.

While his words confused her, a memory slithered to the surface. “It always starts like this.”

His eyes glistened like deep pools in the shadows as they met hers. “I don’t understand.”

Sara huffed because she didn’t understand either. It felt as if they had lived this before, but that wasn’t possible…was it? Pushing through the muck of her mind, she replied, “Of course you don’t. So, what do you want, Kaos?”

“I thought we could talk.”

“I’m confused. What are we talking about?”

“I thought we would talk about us getting to know each other.”

Her fingers trembled where they continued to trace over the scars on her arm, Sara tried to pick apart what was going on. “But you don’t like me.”

He pinched the bridge of his nose. “I like you, but you can be a bit much sometimes. I need to get used to that.”

Affronted that he felt the need to ‘have to’ do anything for her, she narrowed her gaze on him. “No, you really don’t. I mean it’s not like we live in an installation, K. You don’t have to do anything you don’t want to.”

“Then tell me exactly how you meant it?” Her nails dug into her wrist.

She held a hand up to stop him. “Look, I know I used to seek you out, and maybe I played up the pranks more than normal. But I’m thrown because the last time we talked you didn’t want anything to do with me. Hell, you—”

“Sara,” Kaos cut her off, “I didn’t care that you followed me, hell I didn’t even care about some of the pranks. I did care that you came on too strong, but we handled that. At least I thought we did. Did something change while I was gone? I’ve tried seeing other women, they didn’t work.” His dark eyes met hers as he leaned forward and braced his forearms on his knees. “I’m asking you for the opportunity to try with you.”

She studied him. He seemed sincere. Every dream she had lately centered around him. Well, the dreams that didn’t turn into nightmares. “You’re serious?”

“I feel like you and I have spent a lifetime getting to know each other in my head. But I can’t remember how that could be. Nor why I feel that way.” She searched his face. “Do you know why that is?”

“No, Sara. I’ve no clue why that would be. Maybe you studied me more than we both realized?”

She hummed as she turned that thought over, but it didn’t feel right. “I know you like the color blue, but not the light ones. You like the one that’s about the color of your eyes—”

“And I know you prefer mint tea before bed and not coffee.” How did she know these things? They had no tea at the Defenders’ house except what Sara had had before she’d taken possession of this cottage. But she knew this with a bone-deep certainty, had seen it somewhere.

Is that something I want now? Why the hell are you hesitating, Sara-girl? This is what you’ve craved since the first time you laid eyes on the man.

But it all felt off to her as if she were being manipulated by something, or someone else. Digging her right hand into her left wrist again, Sara felt the pain and knew it wasn’t a dream.

And why the hell does the pain reassure me?

She needed to get beyond all these doubts and live outside her head. Outside the worry. Taking a chance, she nodded. “Okay.”

“Yep.” She pushed to her feet, sleep beckoned. With Kaos back, she knew she was safe. She stifled a snort. As if he would be able to keep the nightmares at bay, but maybe because of him, she would be able to rest for longer than a few hours.

The promise of sleep made Sara head for her home.

“How about lunch tomorrow? You can bring whatever is on special at the Cook House,” she tossed over her shoulder.

A soft grin tugged at Kaos’s mouth and made him look younger even with all the silver interspersed through his black as night hair. “I’ll be here.”

“See ya’ then.” Sara pushed through the door and stumbled down the hallway; her barefoot tangling in the loose blanket, almost causing her to fall. Arriving at her bed, she rolled into it and dropped off to sleep as soon as her head touched the pillow.