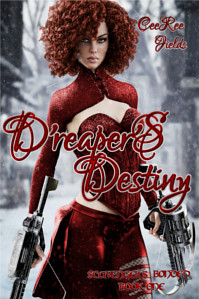 What would you sacrifice to meet the man of your dreams?

Zroya lives a sheltered life within the Southern Installation. Protected from the ‘contamination’ that brought humanity to the brink of extinction, she’s terrified to leave the safety of the known for the unknown. Even though women are treated like cattle within the Installation, it’s still familiar. However, it’s now Zroya’s time to become a breeder, she balks and is imprisoned.

Slaughter D’Reaper has been free from Installation control for sixteen years and thanks the Creator every day for that privilege. Now, he and his brothers are hunting for Zroya, to give her that same choice. How does he know about Zroya? From dreams that have been sent to him since he was fourteen. His obsession knows no bounds as he tears apart the country of Amelorica searching for the woman he’s come to love.

But is it true love? Or only a dream?

This story is a cross between sleeping beauty mixed with Dr. Jekyll and Miss Hyde.

Draper had given her an apple. No one had ever thought of her well being before. In the Installation Zroya had always fended for herself, she could never depend on anyone for anything. That precious gesture warmed a place deep inside. She knew he’d meant both apples for himself. And instead he’d made do with only the one, so she’d be fed. Her thoughts circled her as she released the bolts from her crossbows.

“Zroya, you ready to wrap it up?” Sara asked from across the pavilion.

“One more round?” Zroya snagged the bolts, reloaded her weapon and set the string.

As she sighted the target, Zroya thought about how Draper didn’t criticize her technique or stance. He’d shown her where she could practice and left her to it. Tears sheened her eyes, he was so different from anyone she’d ever met before. And she’d acted like a scared rabbit rushing to put Sara between them to not feel crowded. Swiping her face with her shoulder, she pulled the trigger and the bolts hit the center one after the other.

Damnable things. she had come to hate the weapons she’d been given as a mocking send off by her father. The only woman to have them her father claimed it’d give her value in the Western Installation. Instead, the things had been used against her by the Commander, held against her and her mother’s head in a teasing game that had enraged her on the trip to trade her to the Western Installation.

Refusing to allow the bastards to win, Zroya had forced herself to place the crossbows into their loops before she left her room this morning. When she gripped the weapons, her breath hitched as memories shredded her sanity.

It took over an hour before she could hit the center mass with her shaking hands. But her perseverance paid off as her memories receded and the weapons began to feel like hers again. Satisfied with how well she did, Zroya took the bolts from the bale of hay for the last time and loped to where Sara waited.

“Did you get to watch Draper train?”

“I’ll take that as a yes.” Sara opened up a bottle and took a gulp. Swallowing, she recapped it. “I’m going to tell you. That man is smoking with a capital ‘S’.”

Sara laughed. “No. It means he’s really attractive. They don’t have that saying where you’re from?”

“No, and yes,” a smile spread across her face. “Draper is smoking.”

Sara nudged Zroya’s shoulder. “You sound so proper when you say it. But don’t worry Birch and I will get you caught up on all the appropriate slang.”

She chuckled, delighted after hearing about Birch from Sara, Zroya was curious about this other warrior woman. Another thing to thank Draper for was the opportunity to have friends.

“Thinking about him again?” Sara plopped down on the bench.

“Don’t do anything. It’s still early. This was the first time you’ve even seen him without him being passed out.” Sara leaned her elbows on her knees. “It’s odd, Draper has never shown an interest in any other female.”

“None? Why?” Zroya couldn’t imagine the handsome man not having a large following.

Sara hummed. “I asked him once, but he was so sad when he answered I never broached the subject again.”

“He said that his woman could only be found in his dreams.”

Zroya’s heart raced and her eyes focused on her fingers as they worried her shirt.

“Did you two share dreams by chance?” Sara asked.

What could she say that was safe? Was it even her place to answer for Draper? Most of Draper’s dreams were her mother’s doing. She took a deep breath. “I’ve only shared a few dreams. But my mother had to be the conduit.” Sighing Zroya explained. “It was my mother sending him her visions that he probably remembers the most.”

“Honey, I don’t think it was your mother Draper was drooling over this morning.”

“Really?” Zroya’s head jerked up. She had been looking at how his dark gray shirt molded to his muscled chest and the black combat pants lovingly hugged his rear. Conflicting emotions roiled in her, on the one hand Draper drew her to him. Whether because of the dreams or if it was something else, she didn’t know. And on the other, he terrified her.